In the town of Minocqua, Wisconsin, the summer population increases to more than 19,000 people from a little over 4,000 full-time residents. One of the reasons is because the small township boast 47 pristine lakes that are dotted with boat owners and visitors from around the world including many summer residents from throughout the Midwest. And that’s where Stengl Marine fits in perfectly. Founded in 1978 by husband and wife team, Jim and Chris Stengl, and now operated by their son, Bill Stengl, the business has been flourishing, and just as the boats they sell get larger year over year, so too has longtime IncredibleBank customer Stengl Marine.

They Started Something Incredible Originally, the company started out as a boat storage service, but in 1988 they began selling ski boats and other types of watercraft. After a successful debut in that market, they expanded their offering to include not just sales and boat storage, but also servicing and maintenance. And, of course, this included a new facility. As the years went on, Stengl Marine continued to grow by selling boats, storing them, delivering the boats for the summer and picking them up in late fall, winterizing the watercraft and servicing the boats when needed. Today, Stengl Marine cares for 600 boats, mostly in Oneida and Vilas Counties, and is building another facility, with the help of IncredibleBank, to accommodate their growing business. IncredibleBank is part of the engine behind our success.

In 2006, Stengl Marine switched to IncredibleBank from another financial institution. The transition started in the simplest of ways with representatives from IncredibleBank visiting with the Stengl family to assess their banking needs and requirements. “We were impressed with their willingness to help us grow our business,” said Bill Stengl. “In fact, IncredibleBank is the engine behind our success. They have been with us through challenging times and good times, but the constant is that they’re always here for us,” Stengl continued. 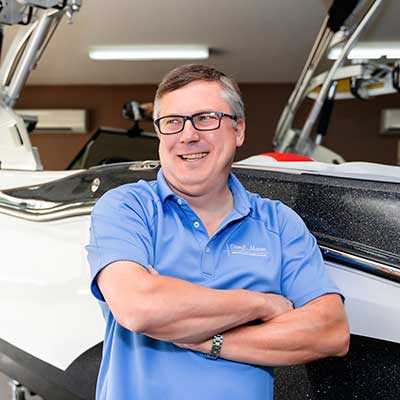 IncredibleBank has always provided us with working capital and loans for expansion, including the latest expansion according to Bill. “What really is most telling for us is that IncredibleBank and its owners share our values of respect for customers, community and our team. To be part of a banking relationship like that is irreplaceable.”

Prior to 1979, Rick and Lynne Reindl had been contemplating their business future. It wasn’t difficult because their passion was the printing industry, but getting started is frequently the challenge, identifying a passion rarely is. Together, the two owners started Reindl Printing in 1979 renting half the space in what was once a livery stable in Merrill, Wisconsin. Armed with four Davidson Duplicators, Reindl’s success was almost immediate and they rented the other half of the building a mere four months later.
Read about Rendl Printing

Starting the business in early 2010 probably wasn’t the best timing for a landscape design firm, but Dave Sether had some contacts and contracts already in place that made the effort a little less daunting. By that time, Dave had already worked for some local landscaping companies in addition to working in the Shorewood suburb of Milwaukee, not far from where he attended college at UW-Milwaukee.
Read about revi Design

On a bright day in 2002, Rimon Moses, CEO and owner of RMM Solutions, was a bit on edge. For a man who consistently remains cool under pressure with an even demeanor, Moses was confronted by two life changing events, all happening within moments of each other. This was the day he would purchase RMM Solutions, a Wausau, WI headquartered IT company, and it would also be the day Sam, his second son, was born. Birth now had a double meaning.
Read about RMM
Get Started